Looking to sell a watch? Select how:

Over 1,500 successful private sellers each month.

Become a Chrono24 dealer
Free Appraisal
What is your watch worth?
Home Magazine All Articles Rolex Daytona vs. Omega Speedmaster vs. TAG Heuer Carrera 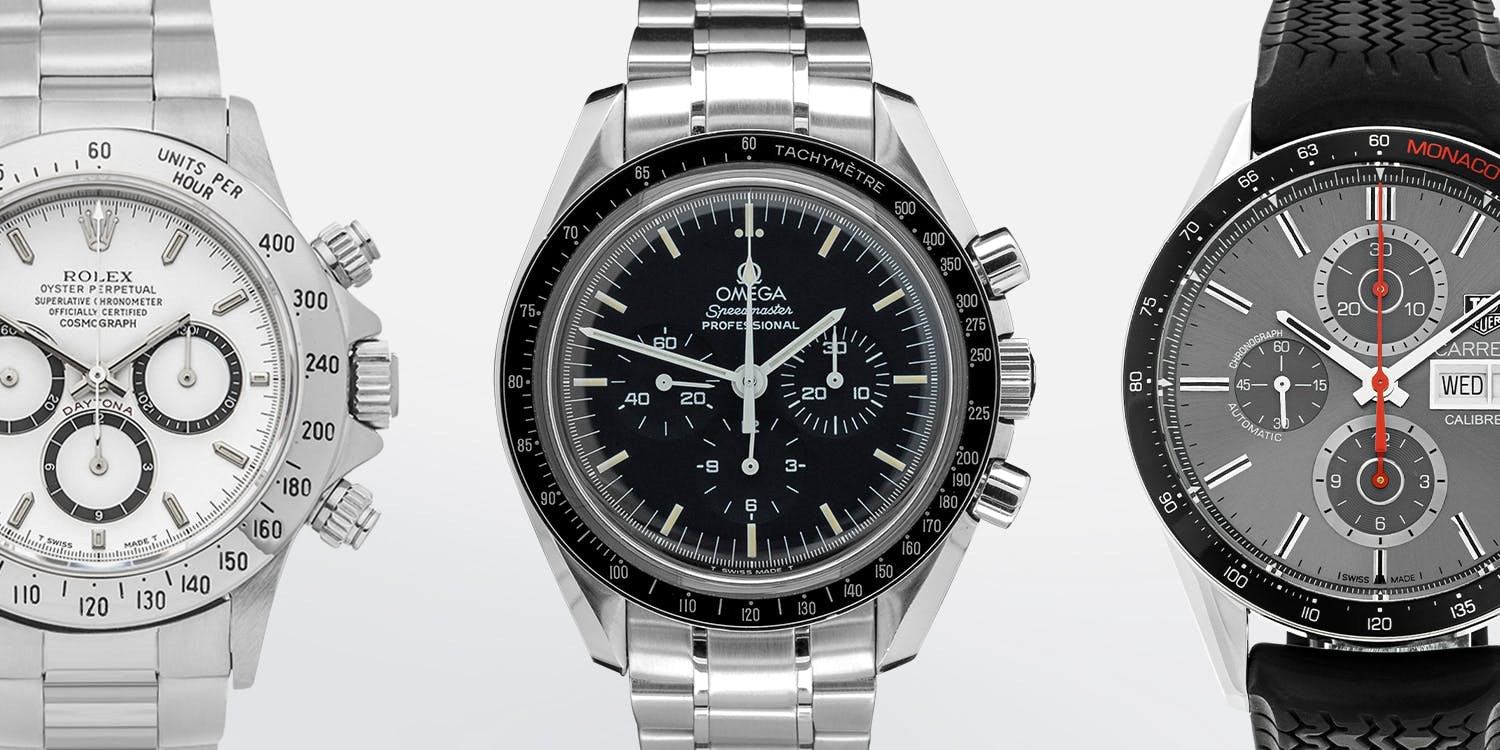 We love chronographs here, so we decided to put three of the most iconic sports chronographs of all time against each other. I think we often forget just how useful chronograph wristwatches can be day-to-day. Plus, they’re one of the most difficult complications to master; you can read more about that in our chronograph article. Together with their sporty nature you’ve got, in my opinion, a pretty darn cool wristwatch. The three chronograph timepieces we’ve chosen all have something in common, but most importantly, they’re all easily recognizable as true icons of watchmaking.

Introduced in 1963, the Carrera was the first line of Heuer watches with its own brand name. The Carrera was an evolution in terms of design for Heuer and it was distinctive among the more widely seen chronographs of the 1940s and 1950s. Jack Heuer, who was CEO at the time, wanted a watch that was highly legible. It’s fair to say that he wasn’t a fan of the unnecessary tracks that could be found on other chronographs of the era, so he had the 1/5 second scale printed on the thin inner bezel of the watch. This allowed for a simpler and cleaner look, but also made the dial look larger. All in all this arguably resulted in one of the most attractive chronographs ever made. 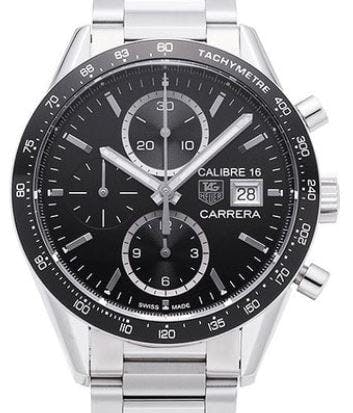 Designed with racing drivers and motorsport fans in mind, Jack knew he needed a name that would evoke the motor racing spirit. The name Carrera can be traced back to the 1950s when a legendary event called Le Carrera Panamericana took place. Some of the world’s greatest drivers attended this grueling and often deadly race through Mexico. Jack Heuer, being a lover of motorsports, heard about this race and was taken aback by the name Carrera, the Spanish word for career or race. Jack decided to register this name for his new watch.

Heuer had a clear vision for the Carrera, hence a name that was easy to pronounce and internationally recognized was appropriate to mark the departure from the chronographs Heuer had produced in previous decades. The first two models of the new Carrera line were the 36 mm Carrera 12 ref. 2447, which featured a three subsidiary dial layout for registering hours, minutes, and running seconds, and the Carrera 45 ref. 3647, which only featured 45-minute and running seconds sub dials. The Carrera 12 housed the revered Valjoux 72, which was also used in other notable watches from this time such as the Rolex Daytona. The TAG Heuer Carrera was a great success, which spurred the development of further variations.

The design of TAG Heuer’s infamous chronograph may have changed somewhat over the years, but it is still distinct to the line. Today, the Carrera, with its numerous variations, remains one of TAG Heuer’s flagship models. But one thing is for sure with the Carrera: Whether you are looking at a new or vintage model, its characteristics are unmistakable. 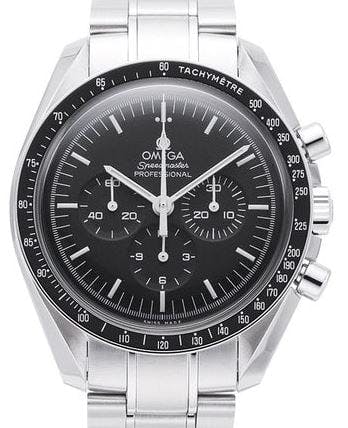 Of the three watches we are talking about, the Omega Speedmaster probably has the most interesting history. The original Speedmaster Ref. CK2915 was actually meant to be a watch for race car drivers, sports people, and engineers who needed a chronograph. This is rather ironic seeing as it became famous for reasons that have nothing to do with tarmac, sports, or even Earth itself. When Claude Bailod at Omega designed the Speedmaster and Pierre Moinat and his team developed it, I’m pretty sure they never guessed the impact it would have or its cult following.

As you may be aware, the Speedmaster was given the nickname ‘Moonwatch,’ but this wasn’t until some testing had already been done. In 1962, NASA tested five wristwatches: a Bulova, a Longines-Wittnauer, a Rolex, a Waltham, and of course, an Omega. At this point, you don’t need to be a genius to work out which watch NASA chose to accompany the Apollo 11 astronauts to the moon. Thus, the Speedmaster became known to many as the ‘Moonwatch’.

Of the three watches in this lineup, the Omega Speedmaster is the only sports chronograph that actually looks exactly like the original model that went to the moon. It has undoubtedly seen a few changes here and there, but the end product looks the same: a sign of great design that evokes the saying, “if it isn’t broke, don’t fix it.” 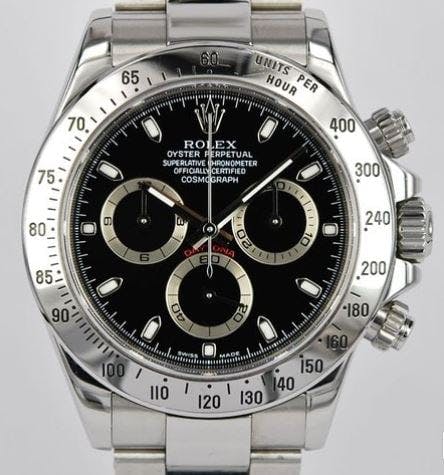 Probably the most famous of the three chronographs in this article, or on equal par with the Speedmaster, the Rolex Daytona is adored by many for reasons unknown, but also loved by many for very good reasons. It was launched in 1963 as the Cosmograph Ref. 6239 and like the two other legendary chronographs, the Daytona is inspired by motor racing. The original name of the Daytona was actually ‘Le Mans’, but obviously this name didn’t stick.

When the Cosmograph made its way across the pond, Rolex USA requested that ‘Daytona’ be inscribed on the dial for the American-market models since Rolex was the official sponsor of the 24-hour race at Daytona. However, this name change didn’t fully take place until 1964. Each winner of the grueling 24-hour race has since been presented with one of the watches as part of their prize.

The Rolex Daytona is undoubtedly the most collectible sports watch in existence and is still the most popular contemporary chronograph in the world, but vintage Daytonas have an extra something special about them. As mentioned, the 6239 was the first Daytona to be introduced and like the Speedmaster, it sported a tachymeter bezel. Through the early years, small adjustments were made to this and the dial. Beating away at the heart of the early Daytonas is the infamous Valjoux 72 (the same movement mentioned above in the Carrera), which Rolex renamed the 72B.

The next significant change came just a year later in 1965. Rolex has always prided themselves on having water-resistant watch cases, so to have a wristwatch that wasn’t fully deserving of their ‘Oyster’ inscription on the dial wouldn’t do. Thus, out went the pump chronograph pushers and in came the new screw-down pushers (this reference is known as the 6240), making it a true Oyster Rolex and the blueprint for today’s models.

Today, the Daytona is still a chronograph that draws even those who know very little about it. The design is timeless and just this year Rolex introduced the latest evolution that once again got many people talking.

By Christopher Beccan
May 27, 2016
View all articles
Next article

May 27, 2016 by
Christopher Beccan
View all articles

Editor’s Picks of the Week – Zenith, Hermès and Rolex

The Watches of Team Chrono24: Pascal

What trends, watches, and brands played an important role in 2018?